
Search
About Us
Let the life become more beautiful
All categories


Legend goes that a cluster of beautiful elfins are dwelling at the backyard of Hyupnos the Sleeping God. They are submissive, gentle and nice-looking and serve as gardeners.

Each elfin has cunning and razor-thin wing that can produce melodious sound of nature by stirring the surrounding air, and those who hear it would forge about all trivialities in life, are blissfully happy and unconsciously fall to dreamland. For several nights on end, Melty, wife of Hyupnos, would fall to sleep with the gently wafting Aeolian bells of wing by leaning against the window lattice at the backyard.

One day, a little elfin broken her wing out of imprudence and thus absented from the labor, which was discovered by Hyupnos. The grumpy Sleeping God, in his tantrum, degraded the elfin to the man’s world. The poor injured elfin who fell to the man’s world was saved by an aged peasant. The elfin was grateful.

From that day onwards during sunset, people would enjoy the wing Aeolian bell that used to be exclusive to Gods only. People would sense the innermost words against the magnificent and moving melodies.

That sound is addressed by later generations as Mengzhiyu (sound of dream).

The logo of Mengzhiyu (Wing Aeolian Bell) gets its hints from the enchanting elfins at the backyard of the Sleeping god in the brand tales. By extracting aesthetic and concise dynamic lines extracted from the contour of elfin wing, it re-demonstrates the image of classical elfin. When the wings are moving up and down, the air is stirred, generating the aeolian bell kind of sweet sound.

Scan the QR code to read on your phone 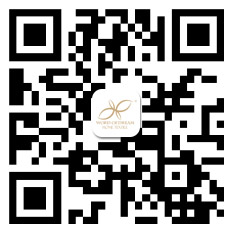